Robert Graves had just left Charterhouse and joined his family in Wales, when England declared war on Germany. He immediately decided to enlist, partly because he dreaded the thought of going to Oxford in the autumn and spending the next three years in another educational institution. Graves joined the Royal Welch Fusiliers at their regimental depot in Wrexham, where he began his military training, and in May 1915 was sent to France. The horrors of trench warfare and the gradual sense of the futility of war is reflected in Graves’ war-poetry. He shared these feelings about the war and about poetry with his fellow poet Siegfried Sassoon, who was also in the Royal Welch Fusiliers and who became a very close friend. In May 1916 Graves published his first book of poems, Over the Brazier. In July of that same year he was seriously wounded by a shell in the battle of the Somme and erroneously reported “died of wounds”.

I very much regret to have to write and tell you your son has died of wounds. He was very gallant, and was doing so well and is a great loss.

He was hit by a shell and very badly wounded, and died on the way down to the base, I believe. He was not in bad pain, and our doctor managed to get across and attend to him at once.

We have had a very hard time, and our casualties have been large. Believe me you have all our sympathy in your loss, and we have lost a very gallant soldier.

Please write to tell me if I can tell you or do anything.

In January 1917, after a period of recovery in England, he returned to France, but his weakened lungs were unable to endure the terrible conditions of the front and in February he went down with severe bronchitis and was sent back home; this time he was declared unfit to return to the trenches. It was then he fell in love with seventeen-year-old Nancy Nicholson, whom he had first met in May 1916 when on leave. She was the daughter of the painters William and Mabel Nicholson, sister of the painter Ben Nicholson and herself an artist and an ardent feminist. They were married in St. James’, Piccadilly, on January 23rd, 1918, by which time the success of his Fairies and Fusiliers (1917) had established Robert Graves as a poet. When the Armistice came, as he recalls in his autobiography, “the news sent me out walking alone […] cursing and sobbing and thinking of the dead.” War had left not only physical scars but a severe shell-shock. In January 1919, shortly after the birth of his first child, Jenny, he was demobilized.

After a week spent under raining skies,

In horror, mud and sleeplessness, a week

Of bursting shells, of blood and hideous cries

And the ever-watchful sniper: where the reek

Can’t sleep, must lie awake with the horrid sound

That roars and whirs and rattles overhead

All day, all night, and jars and tears the ground;

When rats run, big as kittens: to and fro

They dart, and scuffle with their horrid fare,

And then one night relief comes, and we go

Miles back into the sunny cornland where 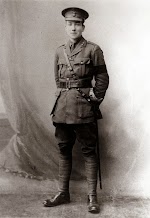 “I can’t imagine why I joined […] I am violating all my most cherished anti-war principles but as D.N.B says ‘France is the only place for a gentleman now, principles or no principles’.” (From a letter to Cyril Hartmann) 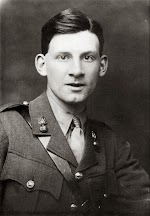 Siegfried Sassoon, poet, a close friend of Graves during the war. Like Graves, he served in the Royal Welch Fusiliers. 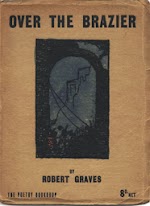 3.3 Cover of Over the Brazier

“The German batteries were handing out heavy stuff, six-and eight-inch, and so much of it that we decided to move back fifty yards at a rush. As we did so, an eight-inch shell burst three paces behind me. I heard the explosion, and felt as though I had been punched rather hard between the shoulder blades, but without any pain. I took the punch merely for the shock of the explosion; then blood trickled into my eye and, turning faint, I called to Moodie: ‘I’ve been hit.’ Then I fell.” (Good-bye to All That, chap. XX)

Rosaleen is in army nurse uniform, shortly before being sent to France.

Robert, recovered from his wounds but declared unfit for trench warfare, is already in love with Nancy Nicholson.