Robert Graves —his full name was Robert von Ranke Graves— was born in Wimbledon, London, on July 24th 1895. His father, Alfred Perceval Graves, of Anglo-Irish descent, was the son of the Bishop of Limerick. He was a civil servant who worked as Inspector of Schools and also a poet, with a great interest in Irish folk songs and mythology. Robert’s mother, Amalie (Amy) von Ranke, was the daughter of Heinrich von Ranke, a German doctor, and grand-niece of the German historian Leopold von Ranke, her mother being of Norwegian descent. When Alfred married Amy he was a widower with five children and together they had five more, of which Robert was the third. They lived in a large house in Wimbledon but also had a house in Harlech, Wales, where they spent their holidays. Robert disliked Wimbledon, which he described as “neither town nor country”. But he loved Harlech, where he roamed around the hills with his sisters. It is in fact the landscape of Harlech, its hills and coastline, on which Graves draws persistently for his poetic imagery. The children were also taken abroad to stay at their grandfather’s house in Bavaria, until his death in 1909. Life at home was dominated by Amy’s strict religious and moral views; but she and Alfred also encouraged artistic interests and there was a strong literary and musical atmosphere in the house. 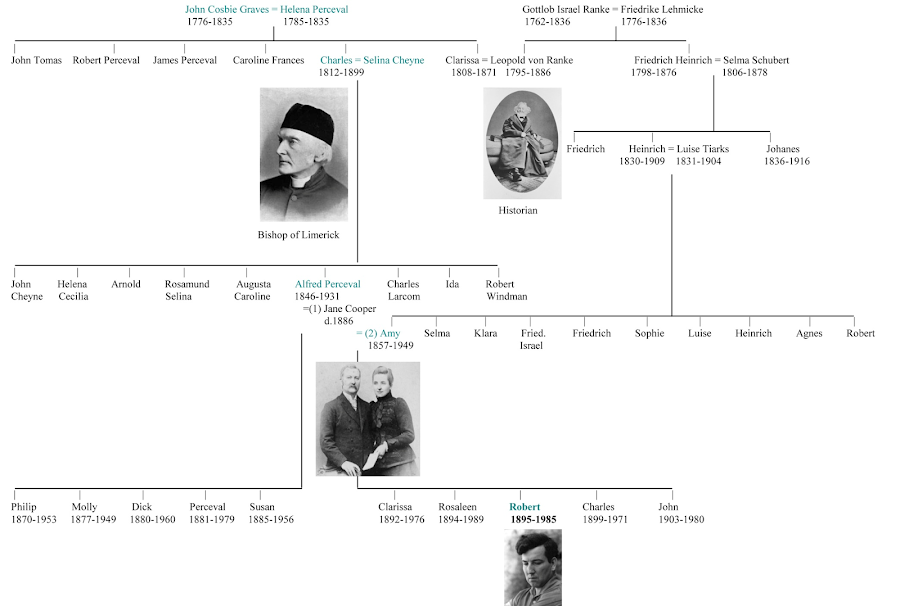 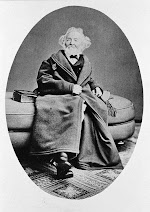 “Leopold von Ranke, the first modern historian, my great-uncle, introduced the ‘von’. I owe something to him. He wrote, to the scandal of his contemporaries: ‘I am a historian before I am a Christian; my object is simply to find out how the things actually occurred.'” (Good-bye to All That, chap.I) 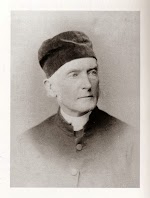 “My paternal grandfather, the protestant Bishop of Limerick, had eight children. He was a remarkable mathematician […] and also the leading authority on the Irish Brehon Laws and Ogham script.” (Good-bye to All That, chap.I) 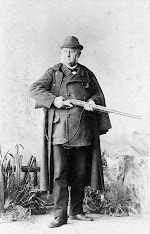 “To Heinrich von Ranke, my grandfather, I owe my clumsy largeness, my endurance, energy, seriousness, and my thick hair.” (Good-bye to All That, chap.I) 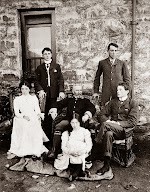 From left to right, Perceval and Dick, standing; Molly, APG and Philip sitting on chairs; Susan is sitting on the carpet. 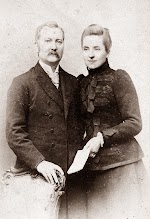 “I can admire my father and my mother: my father for his simplicity and persistence, and my mother for her seriousness and strength. Both for their generosity. …In physique and general characteristics my mother’s side is, on the whole, stronger in me. But I have many habits of speech and movements that are peculiar to the Graves’, most of them eccentric. Such as finding it difficult to walk straight down a street; fidgeting with bits of bread at table; getting tired of sentences when half-way through and leaving them in the air; walking with the hands folded in a particular way behind the back; and being subject to sudden and most disconcerting spells of complete amnesia.” (Good-bye to All That, chap.I)

1.8 Amy Graves with her children

“This country (and I know no country like it) seemed to be independent of formal nature. One hardly noticed the passage of the seasons there; the wind always blew across the stunted grass, the black stream always ran, cold and clear, over black stones. The mountain sheep were wild and free, capable of scrambling over a six-foot stone wall […] and when in repose, easily mistaken for the lichen-covered granite rocks strewn everywhere.”(Good-bye to All That, chap.V)