As well as Ca n’Alluny, La Casa de Robert Graves, there are several places of interest for those who wish to follow his footsteps in Deià 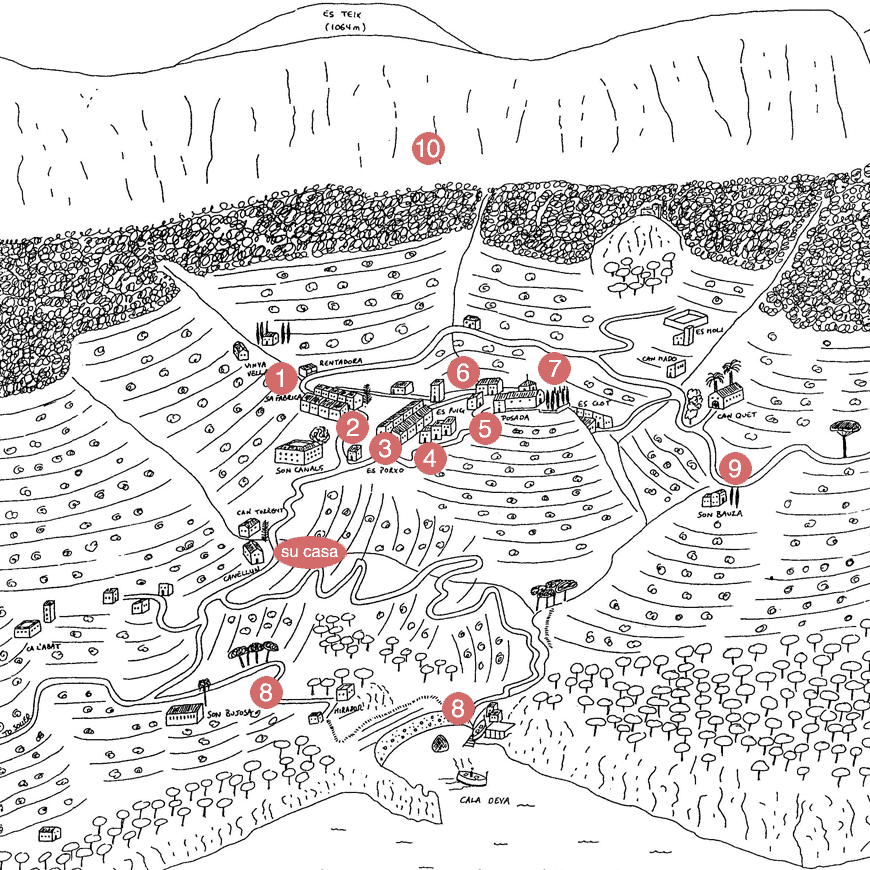 The logical place to begin is by Sa Fabrica, the building now occupied by the Las Islas shop and the Xelini restaurant. The name derives from the 1920s when its owner, Joan “Gelat” installed a steam engine in what was warehouse on the ground floor, and depending on the season powered a wheat mill, an olive press or a soap manufacturing process, and produced electricity a night. Gelat was a key figure in Graves’s first period in Deià. He was Graves’s friend and factotum and helped him with building of Ca n’Alluny, and with acquiring more land and La Posada, his second house by the church. Gelat looked after Graves’s properties when he had to leave the island during the Spanish Civil War and the Second World War. For his part, Graves bought him the electricity generator (now in the Ca n’Alluny garden) and which was powered by a water turbine in Can Madó and which produced electricity for the village until 1963. 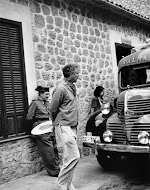 By the time Graves arrived in the village Gelat had set up a daily bus Palma which remained in service until the 90s. The large sliding door of the Xelini restaurant was that of the bus’s garage. In the photo is Graves waiting for the arrival of friends on the bus. 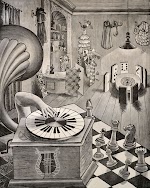 With his new generator at Ca’n Madó, Gelat removed the old equipment out of Sa Fabrica and turned part of it into a café which Graves and Laura Riding then frequented. The bar (in the space now occupied by the Las Islas shop) is pictured in a drawing by their friend and painter John Aldridge. Here they played cards, danced, listened to the radio, and attended the variety shows Gelat organized in his small theatre.

Opposite Sa Fabrica was Ca n’Pep Mosso, the café where Cástor González, the postman, left Graves’s post. The post arrived on Gelat’s bus at four o’clock in the afternoon, and Castor sorted it and delivered it by five. The bus also brought up blocks of ice for the village ice-boxes.

A short way the main street is the chemist shop. But just before you reach it, is a stone bench. This was where the patrons of Margalida’s café sat, and where Graves and Riding were patrons before Gelat opened his one in 1935. Immediately next to the chemist are the steps which led up to the Fonda Coll (now Bar Sa Fonda) where, in the 1950s, Graves and his family used to go to eat on Sundays. A couple of doors further down was the Guardia Civil headquarters. In the photo he and Gelat (with Graves’s dog Solomon) are in the foreground. Laura Riding and his secretary Karl Goldschmidt are on the bench with friends. 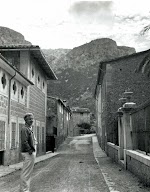 The path down by the steps opposite La Fonda leads into Calle Porxo. At the end of this street is “Sa Torre”, the house Graves bought in the 1960s to put up his friends.

At the other en is the Deià Town Hall, where in 1968 he was made “Adoptive Son” of the village.

Just opposite the exit of the steps into Calle Porxo was the butcher where Graves bought meat. A sheep was slaughtered once a week, so the choice was limited. Most the meat was bought on a weekly trip to Palma. Fish delivered from the fishermen on the beach. 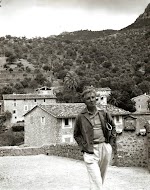 Climbing the steps behind the town hall and the public water cistern one reaches the Estanco, the shop where Graves bought most of his vegetables, groceries, and his cigarettes. He had an account there which he paid at the end of each summer (some “friends” abused the system). The photo shows Son Canals farm house, now part of La Residencia hotel. The land on which Ca n’Alluny (La Casa de Robert Graves) is built and the olive grove below, belonged to this farm. 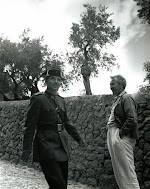 From the 1940s until the end of the 1960s Deià had a small Guardia Civil garrison (near the present chemist) with six or seven guardias under the comand of a corporal, who were supposed to stop (unsuccessfully) the landing of smuggled cigarettes. 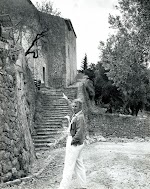 These steps lead to Graves’s guest house, Sa Posada, which backs on to to the church. Graves and Riding bought in 1935 and lovingly restored it. After the war, during his children’s holidays, he used it as retreat to be able to work in peace. Then, when friends began to come over from England to visit in summer, Graves put them there, again so as not to be interrupted in his work.

In 1965, his son and daughter-in-law were allowed to move in, and it was then that he acquired Sa Torre for his guests. 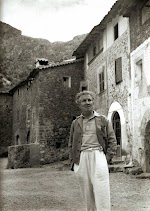 Climbing up the hill a little further we come to la Plaza del Puig where village events used to take place: the bonfire on the eve of St Anthony (January 17), the plays and folk dances for St John (24th June — mid-summer), and for kicking a football any day if the year. One of the village bakeries, the one Graves got his bread and his ensaimadas from, was on the square.

Past the church, which is consecrated —as was his Oxford college— to St John the Baptist, is the beatiful Deià cemetary. Graves is buried under a great cypress tree, and his tomb is maked by a simple insciption on a cement slab. On occasions a poppy wreath with the Royal Welch Fusiliers insignia conmemorates the fallen. Graves is also conmemorated on a stone in “Poets Corner” of Westmister Abbey along with fifteen other First World War poets. Near his tomb are those of his wife Beryl, his friend Joan Marroig Mas (Gelat), and many of his neighbours.

Every day, winter or summer, of the weather were good and the was sea calm, Graves went down to the Cala Deya by the Son Bujosa path, passed a square building called the “Mirador”, and then down the stone track to the beach. In the photo we see him leading his donkey Isabella with his sons on her back. He avoided the road which is used today by cars, and which he build and paid for with the proceeds of I, Claudius. It brought unhappy memories.

He learned to climb with his friend the mountaineer George Mallory who was lost on mount Everest in 1924. Graves remained in good physical shape well into his 80s and here he is seen at 70 making his daily traverse to reach the ledge from which he dove into the sea. It rarely took him more than an hour to walk down, have his swim, climb back up and be back at his desk ready for more work. 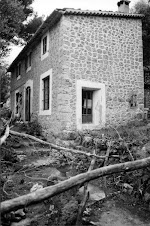 When they arrived in Mallorca, Riding and Graves stayed at the Gran Hotel, en Palma. They were told that Deià was cheap and that the fish was cheap. So they went up and rented Ca sa Salerosa which is on the west side of the Deià valley, a spot where the sun barely reaches in winter. After a year they bought the land on the opposite side of the valley where they saw there was plenty of sun in winter, and there they built Ca n’Alluny

They set up the Crown Albion in an outhouse they built around the back of the house, and it was here that they printed the four Seizin press books they published in Deià.

Robert Graves fought to maintain the Serra de Tramuntana as it had been when he first came to the island in 1929. By the 1960s the pressure caused by mass tourism and he used his influence help get the building regulations changed in the early 70’s so that houses were built in the local style and faced with local stone. He would have been happy to know that this eventually allowed the whole of the mountain range to be declared a Cultural Landscape Heritage Site by the UNESCO. One of his Oxford friends was Sir Julian Huxley who was the first Secretary General of UNESCO.