In May 1946, after having obtained visas to travel to Spain, Graves took his new family to Majorca. The journey was made by air-taxi, and theirs was the first civil aeroplane from abroad to land on the island since the outbreak of the Spanish Civil War. When they arrived in Deià, Robert found the house just as he had left it ten years earlier, and Juan Marroig, who had been imprisoned for a time during the Spanish Civil War, was there to greet him, with other village friends. Karl Goldschmidt (now Kenneth Gay, since his British naturalization) joined him the following year and resumed his work as Graves’ assistant.

The family settled down quickly; the children went to the village school and became integrated in Majorcan life, though at home they kept up many English traditions, such as Christmas celebrations and birthday parties. As from 1948, the family made yearly trips during the school summer holidays so that Graves could see agents and publishers and so that the children could see a bit of world.

Back in Deià Graves completed The White Goddess, wrote his novels The Isles of Unwisdom (1949) and Seven days in New Crete (1949), and translated from the latin Lucius Apuleius’s The Golden Ass(1950). In 1951 Graves was working in collaboration with the Hebrew scholar Joshua Podro on The Nazarene Gospel Restored, a fresh and detailed analysis of the Gospels which met with opposition from both the Protestant and the Catholic Churches.

In 1952 Robert and Beryl rented a flat in Palma for a few years, so that the children could attend better schools and their last child Tomás was born there in 1953. The next important landmark in Graves’ work was The Greek Myths (1955), which became a reference book for a wide public. That same year Graves gave the Clark lectures in Trinity College, Cambridge and soon after began receiving invitations to give talks at American universities. This made it financially possible to send the children to schools abroad, and Beryl and Robert returned with their youngest son Tomás to live in Ca N’Alluny.

9.1 The plane that took them to Majorca

The Dragon-Rapide in which the Graveses travelled to Spain in May 1946. It was the first civil aeroplane from abroad to land on the island since the outbreak of the Spanish Civil War. The local press commented on the arrival of the “journalist” Robert Graves. “Writers” were frowned upon by the Franco régime. 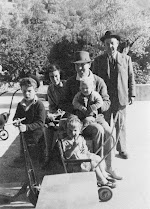 Back at Ca n’Alluny in 1946: Juan Marroig (Gelat), who had taken care of the house during Graves’s ten years of “exile”, was there to welcome them.

9.3 In his work-room with Kenneth Gay

In 1947 his assistant and secretary Karl Goldschmidt, now a British national, returned to Deià to work with Robert. During the war Karl had joined the British army and had been made to adopt a British name – Kenneth Gay.

Working on The Nazarene Gospel Restored at La Posada.

At a Publishers vs. Writers cricket match. From 1948 on, Graves made a yearly trip to England to visit his agents, publishers and his friends; and so that his children could see a bit of the world outside Deià.

Striding past the Bar Bosch In Palma.