The White Goddess had provided Graves with a coherent framework for his particular views on poetry and the history of western civilization. It brought together the many aspects of his work, from scholarly studies of mythology and religion to the writing of novels and essays, and established his role of a poet. The muse figure always remained central to Graves’s theory of poetic inspiration and from the early fifties to the end of his writing life. He was elected to the Chair of Poetry at the University of Oxford for the period 1961-1966.

Apart from his constant output of poetry Graves continued to write novels, essays, short stories and translations. In 1964 he published his last important mythological study, The Hebrew Myths, which was yet another stage in his efforts to connect the mythical patterns of western culture. In 1962 he attended the premier in Athens of an opera based on his novel Homer’s Daughter. Through his life and work Robert Graves was increasingly seen as a figure that had brought together the culture of the Anglo-Saxon North with that of the Mediterranean South, the English poet self-exiled to a Mediterranean island who wrote about ancient Greece and Rome. During these years he also turned his attention to many new subjects, such as the use of hallucinogenic mushrooms in religious rituals of ancient Greece, and oriental mystic philosophy as expressed in Sufism. His ideas on the feminine origins of society appealed to the hippie movement of the sixties.

Graves had now become a renowned figure visited by a variety of people interested in different parts of his work; these included celebrities, scholars, artists, writers and poets –names like Ava Gardner, Alec Guinness, José Luís Borges, Ralph Vaughn Williams or Julian Huxley. He was invited to visit Israel where he met Ben-Gurion and Golda Meir. Apart from his Oxford lectures, and lecture tours in the U.S., Graves also lectured in other countries.

Ava Gardner first came to Majorca in 1955, and Graves wrote a short story about her, “A Toast for Ava Gardner”. Their friendship lasted until the end.

Alec Guinness came to Deià with his family in 1957 to work with Graves on a screen-play of I, Claudius.

In 1959 the BBC filmed its first documentary on Robert Graves in Deià. 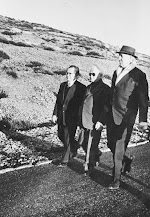 In 1959 Graves was invited by the Israeli government to give a lecture in Israel. He accompanied Primier Ben Gurion on his walk before breakfast.

With them are Tomás, Graves’ youngest son, between Amis and his wife, and Martin Amis.

In 1960 Graves was invited to give a week of seminars at the la Massachusetts Institute of Technology on the poet and the scientist. 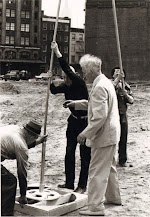 By the sixties Len Lye, his former Seizin Press collaborator, was represented in the Museum of Modern Art (MOMA), and was as original as ever. Graves went with him to watch him set up one of his mobile sculptures in an open space of New York City.

10.8 The filming of “Deadfall” with Michael Caine

In 1966 a film was made near Palma. Graves was invited to take part in it as an extra.