On August 2nd 1935, after two weeks of uncertainly about the seriousness of the Franco uprising, the British ex-consul told them that their last chance to leave was on a British destroyer, the H.M.S. Grenville, sailing from Palma that evening. Graves and Riding, together with Karl Goldschmidt and the young poet Alan Hodge, who was staying with them, had one hour in which to pack. In his dairy Graves writes: “Packed hurriedly and at random. Gelat came and undertook to do everything. He said ‘Sinvergüenzas‘ and wept…Gelat took keys, will keep everything for us… Everyone weeping as we went off.” Graves persuaded the captain of the destroyer to allow Karl Goldschmidt to travel with them, and not be repatriated to Germany, and on August 7th the four arrived in London.

During the next three years, Robert and Laura moved between England, Switzerland and France, waiting for the Civil War to end so that they could return to Deià. Despite their unsettled state, they continued working as hard as ever, Laura becoming more extreme in her belief that she and others could change the world and stop the impending war, and not sparing herself or her collaborators; Robert producing a second important historical novel Count Belisarius. In June 1938 Robert and Laura, together with Alan Hodge and his wife Beryl rented a house near Rennes, in Britanny, where Gelat’s sister lived, and under Laura’s supervision set to work on various projects including her “Dictionary of Exact Meanings”.

In January 1939 Laura read a very complimentary review of her poetry in TIME magazine, written by Schuyler Jackson, a friend of T.S. Matthews, and began a correspondence with him. Soon the group travelled to the U.S. where Matthews and Jackson fixed up accommodation for them. But Laura created a new drama when she fell in love with Jackson and pushed his wife Kit into a mental breakdown. Laura remained with Jackson, whom she eventually married, and thereafter “devoutly renounced” her poetry. Robert was distressed by this radical change in Laura.

I crept to where my window beckoned warm

Between the white oak and the tulip tree

And rapped — but was denied, as who returns

To a house not his own.

But he was already falling in love with Beryl.

Into exile with only a few shirts,

Some gold coin and the necessary papers.

But the winds are contrary…

Alan Hodge and his wife Beryl had both just graduated form Oxford University, and Alan was working with Graves as a researcher for his new historical novel Count Belisarius. Even after his break-up with Beryl, Alan continued working and collaborating with Graves. 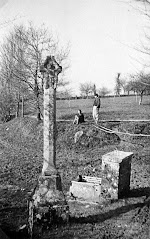