When Graves and Riding left England in October 1929, they visited their friend Gertrude Stein in France who recommended Majorca as a good place to live. Once in Palma they went up to the village of Deià; they liked it — its stone houses, its situation between cliffs and sea, reminded Robert of Harlech — and immediately decided to rent a house there. Soon after, the printing-press was shipped over from England and they resumed their writing and printing work. Two friends from London joined them: the New Zealand artist Len Lye and his wife Jane. They worked with Robert and Laura, Len designing the book covers and Jane typing for them; for the next few years Laura would always be surrounded by hard-working friends, over whom she exerted her astonishing intellectual power, allowing or forbidding people to join her entourage and become a part of the “inner circle”.

If strange things happen where she is,

So that men say that graves open

And the dead walk, or that futurity

Becomes a womb and the unborn are shed,

Such portents are not to be wondered at,

Being tourbillions in Time made

By the strong pulling of her bladed mind

The publication in November of Good-bye to All That, with its frank condemnation of the public school system and the real conditions in the trenches, had turned Robert Graves into a controversial figure, but the book was an enormous success and brought financial relief, allowing Graves to concentrate mainly on his poetry. It also allowed him to build a house outside the village, which they called Ca N’Alluny (The Faraway House). From the start they made good friends among the villagers, in particular Juan Marroig (“Gelat”) and his family. On hearing that a German developer was about to buy a plot of land opposite their house and another down by the sea, Riding decided to buy these lands herself and build a linking road, with the idea of selling plots to foreign intellectuals and creating a university. In March 1932 Graves and Riding moved into Ca N’Alluny, but Laura’s entrepreneurial ideas had brought about a new financial crisis and they had to mortgage the house. Since arriving in Deià Graves’ prose, which included The Real David Copperfield, a rewriting of Dickens’ novel, made little money, and he was forced to sit down and write another book that would sell.

Among the regular visitors to Ca N’Alluny were the poets James Reeves and Norman Cameron, the writers and journalists Honor Wyatt, Gordon Glover and T.S. Matthews (later editor of Time Magazine), Len Lye and the painter John Aldridge; Jacob Bronowski and many others. When they came to see them, Laura would not allow them to speak about Robert’s books.

In 1929 Graves had already become interested in the obscure figure of Claudius, the emperor who came between Caligula and Nero. Now, with the house mortgaged, Graves turned his mind to this historical conundrum and began an exhaustive study of the period. His poetic intuition —or what he later termed analeptic thought, or the recovery of lost events by a suspension of time –served him as much as his scholarship to solve this puzzle. The result was I,Claudius and Claudius the God, in which Claudius is presented as a man of profound common sense and sensibility: a cultured man with republican ideals and an unequivocal awareness of what was going on around him and of his own destiny. Graves’ brilliant recreation of the Roman Empire was an immediate success and won Graves two major literary prizes: the James Tait Black Memorial and the Hawthornden.

But as Graves’s financial situation improved, the Spanish Second Republic was becoming increasingly unstable. On the 18th of July 1936, when Graves had just sent off his novel Antigua, Penny, Puce to the publishers, and Riding was completing her own novel A Trojan Ending, the Spanish Civil War broke out.

Deià nestles in the Serra de Tramuntana (now a UNESCO World Heritage Cultural Landscape) and in the 1930s a remote agricultural village of some 500 people whose main crop was olive oil. There was also sheep farming and fishing. It had a mail and telegraph service and a daily bus.

Ca n’Alluny had a perculiar distribution: a study for Graves, a study for Riding, a study for visitors, a room for the “Crown Albion” iron press, a dining-room, a kitchen, three bedrooms and a bathroom. 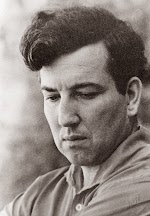 The intimate relationship between Robert and Laura was tense; in the poems addressed to her, Robert beheld her as an almost divine figure, but his love was not reciprocated.

Mistress of air and ocean

And every fiery dragon,

Chained to no cliff,

Asking no rescue of me. 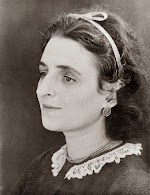 After her “defenestration”, Laura maintained that “bodies have had their day” and led a celibate life. However, professionally things were busy and fruitful, and they collaborated closely in all their work. 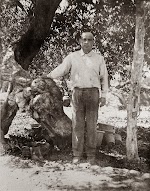 Gelat was the village entrepreneur, and saw a source of income in Graves and Riding. He organized getting the land to build their new house on, and to acquire various other properties in the village.

6.7 With Karl Goldschmidt and village people

One of their friends was a young Jewish art student, Karl Goldschmidt, who had left Nazi Germany, and was to become first an assistant to Laura and Robert, and, after 1947, Robert’s full-time secretary until 1965.

They brought over their Crown Albion iron press from St Peter’s Square and printed more Seizin Press books in Deià.